This section is for TV comedy series by Jennifer Aniston. By default the TV series are presented starting with those ranking highest on the laugh-o-meter, but you can also sort them by year, title or IMDB rating.

( wikipedia | imdb | dmoz )
I haven't yet written a blurb about Jennifer.

Jennifer Aniston is said to have been born on Tuesday 11 February 1969, which would make her 52 years, 8 months and 5 days old (if this date is accurate and she is alive today).

Jennifer Aniston was credited as actor in the following film.
At the time, she would have been about 25 years old. 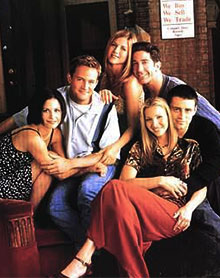 This show does not feature the kind of smart comedy that makes you think; rather, it features situational comedy that makes you laugh—when it works. The show went on for so long (ten seasons!) that if you want to dive into it and have a chance to laugh, you'll have to pick your episodes.
In such cases, my strategy is to get a box set from the library, then to head over to IMDB to select episodes with a rating higher than 8.3. This considerably narrows the range of episodes I need to watch, and I find that with the exception of a few duds, most of these episodes are able to deliver smiles, and hopefully a laugh or two.

More About Friends:
=> Read what people say on Amazon
=> Add your own Review or Comments on
laughDB's full page for Friends