This section is for TV comedy series by Dave Chappelle. By default the TV series are presented starting with those ranking highest on the laugh-o-meter, but you can also sort them by year, title or IMDB rating.

( wikipedia | imdb )
I haven't yet written a blurb about Dave.

Dave Chappelle is said to have been born on Friday 24 August 1973, which would make him 47 years, 8 months and 20 days old (if this date is accurate and he is alive today).

Dave Chappelle was credited as writer and actor in the following film.
At the time, he would have been about 29 years old. 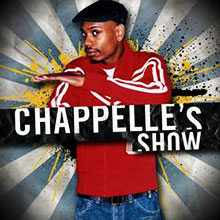 In the first episode of the first season, there was a brilliant skit taking place in a photocopy business. I was ready to become a fan, but over the next few episodes, I found the show to be unequal.

In fact, the good hasn't outweighed the mediocre (or crass) enough to motivate me to persevere beyond the fifth episode. I might get there someday.

I haven't loved Dave's stand-up comedy concerts so far either. But I really enjoyed him in the movie half-baked. (Last viewed: May 2012)