This section is for comedies involving Tommy Cooper as an actor, director or writer. By default the movies are presented starting with those ranking highest on the laugh-o-meter, but you can also sort them by year, title or IMDB rating.

( wikipedia | imdb )
I haven't yet written a blurb about Tommy.

Tommy Cooper was credited as actor in the following film.
At the time, he would have been about 46 years old. 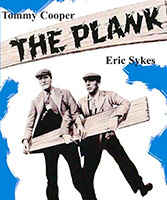 I made myself watch this half-feature because it's supposed to be a classic, but it was clear from the first minute that it's way past its best-by date. The general thread follows two klutzes as they try to bring a plank back from the timber yard to the house they're working on, hitting everything and everyone along the way. This comedy's sub-genre fits somewhere between 'grotesque' and 'slapstick', two poor parents.

Between two yawns I was reminded of the time as a teenager when my host family in England sent me off for the day with a bag of chips and a sandwich which had a fifth of an inch of butter between the two slices of white bread. They used to lay it on thick. (Last viewed: May 2019)

More About The Plank:
=> Read what people say on Amazon
=> Add your own Review or Comments on
laughDB's full page for The Plank


Pages in this section: 1
(This section: Titles involving Tommy Cooper)
Back to the List of Actors, Directors & Writers