This section is for stand-up comedy by Chris Rock. By default the stand-up sets are presented starting with those ranking highest on the laugh-o-meter, but you can also sort them by year, title or IMDB rating.

( wikipedia | imdb | dmoz )
I haven't yet written a blurb about Chris.

Chris Rock is said to have been born on Sunday 7 February 1965, which would make him 57 years, 4 months and 18 days old (if this date is accurate and he is alive today).

Chris Rock was credited as writer and actor in the following stand-up comedy set.
At the time, he would have been about 34 years old. 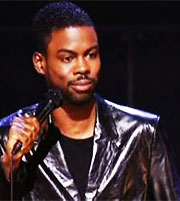 Watch once for research if you want to know who Chris Rock is, although you'll get a better measure of his talent in 2 Days in New York, where he acts opposite Julie Delpy. I like Chris, he just doesn't make me laugh very much. I first saw him in Michael Moore's Bowling for Columbine, in the segment about five thousand dollar bullets, excerpted from this show—perhaps its best piece. Themes include crazy white boys, family, medicine, relationships. I smiled a lot and may have laughed once or twice, but I don't love Rock's strident voice and wound up delivery, nor the amount of time he spends on hard-core adult themes. (Last viewed: September 2010)