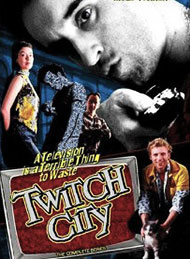 This is one of these rare series that gets better with each episode (there are only thirteen of them, spread over two seasons). It focuses on the life of a recluse who watches TV for much of the day, and the people who come through his flat. It's not laugh-out-loud material, but it's funny and made me smile a lot. It's also original and clever in a way I've never seen before. As we moved towards the end of season two, I was surprised at how attached I had become to Curtis, the show's main character. Highly recommended. (Last viewed: January 2013)

More About Twitch City:
=> Read what people say on Amazon
=> Add your own Review or Comments below

Some of the Cast of "Twitch City"