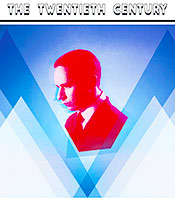 I was suckered into watching this movie by the ever-unreliable comedy label it bears on other movie sites. While it does nothing to deserve that label, its extraordinary strangeness could make it mesmerizing to some of those who are open to considering cinema as an art form sometimes free to stray away from mainstream representations.

The film is extraordinarily hard to describe: the most I can say is that the story is a wild adaptation of the path of a historical figure to becoming Prime Minister of Canada, represented with the use of a pythonesque blend of acting and animation.

As far as Canadian comedy goes, I'll take Jim Carrey or Corner Gas over this any day. Like it, hate it or be confused: you've been warned.

More About The Twentieth Century:
=> Read what people say on Amazon
=> Add your own Review or Comments below


Some of the Cast of "The Twentieth Century"