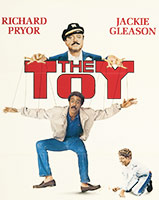 A magnate's son convinces his father to hire a grown man to be his toy for a week. The movie is light-hearted but a bit chaotic for my taste, a trademark of John Landis, whose comedies don't tend to be my cup of tea.

It's a long while since I've seen the original after which this movie was made, the 1976 French film Le Jouet, and even though it didn't leave me with lasting impressions, given that it featured Pierre Richard in his golden years I'm fairly certain it was superior to the remake on most counts, especially the one that matters the most: laughs.

More About The Toy:
=> Read what people say on Amazon
=> Add your own Review or Comments below


Some of the Cast of "The Toy"