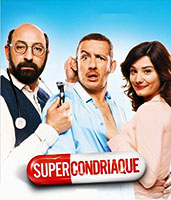 A hypochondriac inserts himself into the life of his doctor, driving him mad, and his wife even more. (If you like this kind of plot, check out What About Bob.) The set-up took was unhurried and was hilarious. About halfway through the movie, when they started to inject a plot, I braced myself for the end of the laughs as that's typically what happens—more action, less comedy. But they managed to keep the fun until the end, with few flat moments in between. I can't say that I laughed hard, but I laughed consistently. It had been a long time since a comedy had made me laugh so much. Don't miss this one. (Last viewed: August 2014)

More About Supercondriac:
=> Read what people say on Amazon
=> Add your own Review or Comments below

Some of the Cast of "Supercondriac"