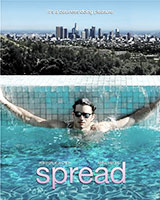 A young man in Los Angeles lives off his good looks as he entices successful women ten years his senior to open their luxurious homes to him.

Although there is humor in it, this movie is not what one might think of as an "Ashton Kutcher comedy", as he plays a role far removed from the goofy characters you may have seen in his earlier films.

The character was fascinating, the cast did a good job and the movie entertained me, but your life probably won't be much poorer if you give the movie a miss.

More About Spread:
=> Read what people say on Amazon
=> Add your own Review or Comments below


Some of the Cast of "Spread"