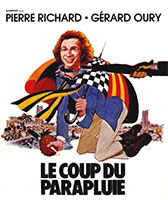 An unemployed actor on his way to an audition walks into the wrong room and believes he lands a big role, though in fact he has been hired by a mobster to eliminate a rival. A very decent French farce with Pierre Richard, along themes reminiscent of his great role in the Tall Blond series. (Last viewed: April 2013)

More About The Umbrella Coup:
=> Read what people say on Amazon
=> Add your own Review or Comments below

Some of the Cast of "The Umbrella Coup"