Now We've Seen It All! 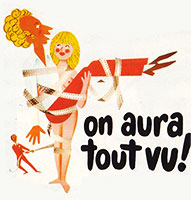 
Two friends have written a script for a pure-hearted romantic film. One of them, who shoots commercials and wants to further his career, reluctantly agrees to sell the script to a producer of adult films. There are many of laughs in the series of shocks and misunderstandings that ensue. As usual, the second half of the film is less funny, but it still works.

This is not an adult comedy film—such as those pathetically unfunny movies that seem to have been so popular at one time in Italy and Australia. Rather, it is a very funny comedy that happens to deal with the pre-production phase of an adult film.

Given the circumstances, the amount of nudity is minimal (although for my taste there was still too much.) In contrast to a great number of comedies that come out of Hollywood these days, this one is never really vulgar—largely because the characters do not speak of adult themes gratuitously. In this age of trashy movies, that such a movie was made with such a delicate touch seems extraordinary: pulling it off was a high-class balancing act. Highly recommended if you can handle a small dose of adult themes. (Last viewed: July 2014)

More About Now We've Seen It All!:
=> Read what people say on Amazon
=> Add your own Review or Comments below

Some of the Cast of "Now We've Seen It All!"