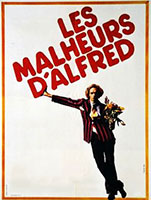 A man who is afflicted with pathological bad luck somehow gets hired to compete as part of a team on a series of TV shows opposing Paris to provincial towns. Here we see Pierre Richard cultivating the "unlucky guy" character that would culminate in La Chèvre ten years later. Low expectations, high reward: a charming, sweet, sometimes very funny movie. (Last viewed: April 2013)

More About Les Malheurs D'Alfred:
=> Read what people say on Amazon
=> Add your own Review or Comments below

Some of the Cast of "Les Malheurs D'Alfred"