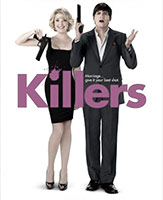 A former CIA operative living an all-American suburban life with his loving wife who is unaware of his past becomes the target of assassination attempts.

The script is as bland as boiled celery. Easily the worse Ashton Kutcher comedy I've ever seen. One has to pity the crew that participates in such a senseless project. If they'd asked my dog to read the script before proceeding, thousands of man hours would have been spared.

More About Killers:
=> Read what people say on Amazon
=> Add your own Review or Comments below


Some of the Cast of "Killers"