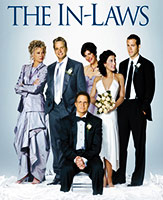 This is a remake of a funny 1979 movie by the same name. Days before his daughter's wedding, a risk-avoiding podiatrist meets the groom's father, who entangles him in the cross-border sale of a nuclear submarine. Albert Brooks slides right into Alan Arkin's shoes, but Michael Douglas can't hold the candle to Peter Falk. The movie can't decide whether it should be about plain comedy or espionage, and ends up settling on a formula of beautiful people and special effects on expensive sets. Alan Arkin and Ryan Reynolds are grossly underused, while Michael Douglas is grossly overused. We couldn't get past the first half. (Last viewed: August 2015)

More About The In-Laws:
=> Read what people say on Amazon
=> Add your own Review or Comments below

Some of the Cast of "The In-Laws"