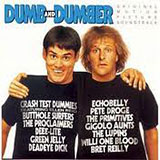 After losing their jobs, two buddies travel to Aspen to return a briefcase which, unbeknownst to them, contains the ransom money for a beautiful woman's husband. A bit slow in the beginning, but the second half, after the duo arrives in Aspen, is very funny. In this movie, Jim Carey doesn't make faces. (Last viewed: August 2009)

More About Dumb and Dumber:
=> Read what people say on Amazon
=> Add your own Review or Comments below

Some of the Cast of "Dumb and Dumber"