Circulez Y A Rien A Voir 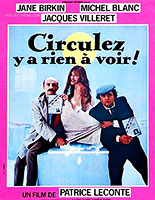 
After a pair of unlikely cops make a routine call at a posh house, one of them becomes obsessed with the lady owner and starts tailing her instead of doing his job. This is a lovely 1980s comedy with very funny moments, particularly in the first half, as you might expect, and fine performances by Michel Blanc and Jacques Villeret, though the latter is underused. Vastly underrated—I was glad to discover it. (Last viewed: July 2014)

More About Circulez Y A Rien A Voir:
=> Read what people say on Amazon
=> Add your own Review or Comments below

Some of the Cast of "Circulez Y A Rien A Voir"