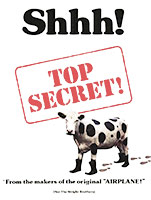 I'm no fan of the absurd as a sub-genre of comedy movies (the only thing I hate more than a bad Monty Python skit is a Mel Brooks film) but somehow found this production surprisingly tolerable. It didn't make me laugh, but I was entertained enough to watch it all the way through.

Why is it that this patently absurdist movie didn't repel me, what was the difference? I think the difference was that they knew when to stop — which is right away. Instead of laying it on thick after a gag, the camera and the action swiftly moves on to the next thing. Even though this still isn't my favorite kind of comedy, at least I found the restraint admirable.

Oh, the plot. Does it matter? Something about an American rock singer in an oppressive East Germany. (Last viewed: May 2019)

More About Top Secret!:
=> Read what people say on Amazon
=> Add your own Review or Comments below


Some of the Cast of "Top Secret!"