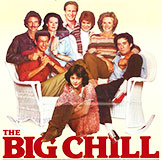 After many years apart, a group of friends are thrown back together for a weekend after a member of their group kills himself. At first, this is more a soundtrack than a movie, as the pace is slow to pick up. You may or may not relate to the characters' musings on life, but there are good actors, such as William Hurt and the too-rarely seen Jeff Goldblum, and it's probably worth watching once. (Last viewed: September 2012)

More About The Big Chill:
=> Read what people say on Amazon
=> Add your own Review or Comments below

Some of the Cast of "The Big Chill"