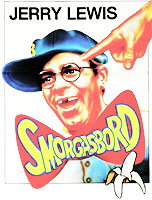 For the longest time, I thought that the frequent American sneering at the French for finding Jerry Lewis funny was a symptom of ignorance on the part of the accusers (did the French really find Jerry Lewis funny?) and of their lack of sense of humor, in keeping with the general lack of appreciation for British humor on the western side of the Atlantic. You see, I hadn't yet watched a Jerry Lewis movie, and I assumed that he had to be terribly funny in a way that most Americans just didn't get.

Some say that this film is Jerry's funniest, but it was one of the least funny comedies I'd ever watched, confirming part of the popular wisdom that I'd so long rejected. I still don't know whether the French find Jerry funny; true or not, the idea that they do is certainly amusing.

I'm sure the man was a genius of a kind and I'm glad he found his public. (Last viewed: December 2018)

More About Smorgasbord:
=> Read what people say on Amazon
=> Add your own Review or Comments below


Some of the Cast of "Smorgasbord"