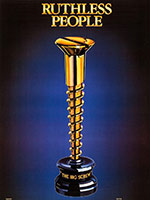 This hour-and-a-half movie is about ninety minutes too long. It may have been okay in its day, but its public was a breed which has since vanished from this Earth.

Delighted that kidnappers are threatening to kill his wife, a business man does his best to disobey their instructions. Meanwhile, the kidnappers (a sweet couple) struggle to get along with their hard-headed victim.

There's nothing particularly annoying about the movie in itself — it has likeable actors doing their best. It's just unbelievably dull.
(Last viewed: May 2019)

More About Ruthless People:
=> Read what people say on Amazon
=> Add your own Review or Comments below

Some of the Cast of "Ruthless People"