Joe Rogan: Live from the Belly of the Beast 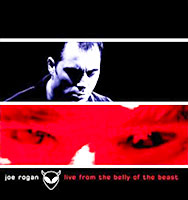 
For the fourth show of Joe's that I watched, I thought I'd go back to the first tape that I could find to see if I could discern a trend, having found his 2009 show Talking Monkeys in Space far inferior to his 2016 set Triggered and the 2018 special Strange Times.

The trend was firmly confirmed. This was shortly before 9/11, there was a president in the White House who hadn't been elected and had already shown his moronic character, but the best Joe could come up with was some gutter humor and Adam Sandler voices.

He was clearly a bright guy even at the time, perhaps sharper than he is now judging by the pace of his delivery, and I bet he is embarrassed with this show now. But he doesn't need to be: no one has to watch it.

More About Joe Rogan: Live from the Belly of the Beast:
=> Read what people say on Amazon
=> Add your own Review or Comments below

View all the sets by Joe Rogan we've reviewed