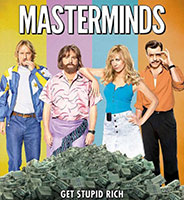 An armored car driver gets seduced into robbing his employer. The cast is excellent and the script gives them plenty to work with. One of the legacies of Meet the Parents is that it is always a pleasure to revisit Owen Wilson as a jerk. The movie entertained us and gave us a few laughs: don't let the low imdb rating put you off, this is a decent little comedy. (Last viewed: June 2017)

More About Masterminds:
=> Read what people say on Amazon
=> Add your own Review or Comments below

Some of the Cast of "Masterminds"