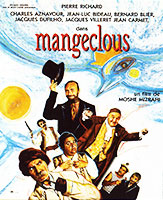 As a young man, I read Albert Cohen's Solal series of novels, in which Nailcruncher belongs. Translating the rich, intimate texture of Cohen's novels for the screen is always going to be a challenge. The director made it that much harder when he picked five actors who are not Jewish, let alone Sephardic Jews, to play the group of friends from a small Jewish community in Greece. It's not that the actors were bad—Pierre Richard and Jacques Villeret may in fact be my two favorite French comic actors. It's that there is an enormous cultural gap between a Catholic from cold Normandy (say) and a Jew from sunny Macedonia. Asking one to play the other is similar to asking Kevin Costner to play an Afro-American mechanic from Mississippi. Jacques Villeret would have had a chance (thanks to his Algerian ancestry) but he was in the wrong role. Apart from this major casting fumble, the movie is not without charm, but that charm is necessarily of a kitsch nature. I did laugh once in a scene involving pistachios—and none of the main actors. (Last viewed: August 2013)

More About Nailcruncher:
=> Read what people say on Amazon
=> Add your own Review or Comments below

Some of the Cast of "Nailcruncher"