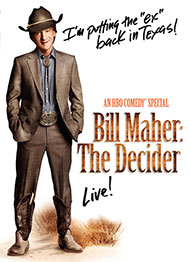 Three-and-a-half stars. The title's "decider" is George W. Bush, which should tell you that much of the show dwells on political themes. Much of the material is often circumstantial (what Senator X did), rather than universal (how dogs behave): in five years, you won't remember half the people he mentions. Since I don't closely follow the news, I prefer the more general segments, such as those about pharmaceutical companies and about religion (a pet topic of Maher's, who wrote Religulous). Maher smiles, he doesn't bark, which makes him endearing for someone commenting on such heavy topics. Some may find the show therapeutic: it's good to know that you're not alone. (Last viewed: August 2010)

More About Bill Maher: The Decider:
=> Read what people say on Amazon
=> Add your own Review or Comments below

View all the sets by Bill Maher we've reviewed