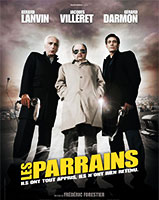 
Three former criminals are reunited when their old companion bequeaths them the lost diamonds from their last venture—under the condition that they track down his son and give him his share of the loot. Between Gérard Lanvin from numerous bad boy roles, Gérard Darmon from Diva and Betty Blue, and Jacques Villeret from The Dinner Game, the casting of the three scumbags couldn't have been better. It's a shame no one told the producers to buy a decent script. I laughed once. With Villeret now gone, I feel sad about this wasted chance for an epic comedy. (Last viewed: August 2013)

More About The Do-Gooders:
=> Read what people say on Amazon
=> Add your own Review or Comments below

Some of the Cast of "The Do-Gooders"