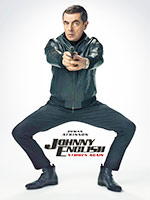 This was not the funniest comedy I'd ever watched, but I was glad to see Rowan Atkinson and the film entertained me more than the vast majority of that year's other comedies. (Last viewed: December 2018)

More About Johnny English Strikes Again:
=> Read what people say on Amazon
=> Add your own Review or Comments below


Some of the Cast of "Johnny English Strikes Again"