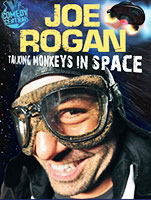 
This was the third of Joe's shows that I watched, one a night, and it was a strange experience. On the one hand, I preferred Joe's delivery (less screaming) and found him both smart and likeable. On the other hand, the set made me smile a lot less than the 2016 show Triggered and the 2018 show Strange Times, and that despite the fact that Joe worked really hard at it.

The second part of the show was Joe answering questions from the public, apparently about a TV show he hosts. Not knowing anything about it, I thought I wouldn't relate (a precondition for comedy) and I didn't watch it.

More About Joe Rogan: Talking Monkeys in Space:
=> Read what people say on Amazon
=> Add your own Review or Comments below

View all the sets by Joe Rogan we've reviewed