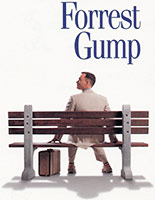 If the focus of this site were light-hearted movies rather than laugh-out-loud comedy, this film would rank pretty high, although it does get heavy at times, especially towards the end. On the laughter dimension, I came out empty-handed on this second viewing after a twenty-odd year gap, although I did chuckle once.

The movie shows us the world through the eyes of a man with a low IQ (I'll refrain from adding "but high sensitivity"). At first I got the impression that the film was going to be about the wisdom of the fool—the eternal theme of the simple man having a deeper understanding of life than his brethren. Fortunately, there was more to it than that, otherwise the nearly-three-hours of reels would have been unbaringly preachy.

Part of the comedy lies in the fact that unwillingly, our character gets to play a part in frontline events and achieves some outstanding deeds—without seeming to care one bit about the ensuing glory. By and large, he does things because he feels like doing them.

Although the movie is sappy at times, it is a real treat in other moments. Overall, I would place it on the shelf of the guilty pleasures of American cinema. Let the record state that I am glad that shelf exists. (Last viewed: April 2018)

More About Forrest Gump:
=> Read what people say on Amazon
=> Add your own Review or Comments below


Some of the Cast of "Forrest Gump"