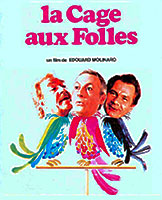 A young man whose dad runs a gay night club must introduce his "parents" to his girlfriend's ultra-conservative father in order to get married. I'm not a fan of over-acted drag queen acts as a comedic device, and there's quite a bit of that in this film. Fortunately there's also humor in other places thanks to a decent script and fine actors (such as Michel Galabru, who always makes me laugh). It turned into a pleasant watch with many chuckles and a lot of smiles. (Last viewed: July 2014)

More About La Cage aux Folles:
=> Read what people say on Amazon
=> Add your own Review or Comments below

Some of the Cast of "La Cage aux Folles"