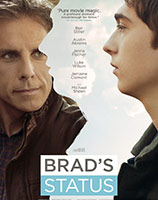 This movie was probably classified as a comedy because Ben Stiller is in it, but in fact it should properly be tagged as a light-hearted drama.

As a result, don't expect laughs here. Nevertheless, the movie is solid and contemplates a time in a person's life (the years around fifty) that rarely seems to be the object of a film's attention.

As he takes his son around Boston to college interviews, the main character is led to examine his life, and sees his place in life in a poor light compared with the achievements of his former peers. Stiller does a great job, and the actor who plays the role of the son does even better—perhaps chiefly because his face is less well-known. (Last viewed: April 2018)

More About Brad's Status:
=> Read what people say on Amazon
=> Add your own Review or Comments below

Some of the Cast of "Brad's Status"