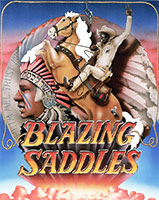 I know that for some Mel Brooks is a big reference in comedy, but I just don't seem to like any of his movies. This one is a little less chaotic than others I'd attempted, and at least I was able to make myself watch it till the end. I had to—Blazing Saddles is something of a cultural icon.

On the verge of being destroyed by bandits, a town telegraphs the governor asking for a new sheriff. Being black, the one who is appointed must overcome the citizens' prejudice. He is soon joined by a skillful sidekick, played by Gene Wilder.

The movie still failed to make me laugh, but it has some redeeming qualities, not least of it its sweetness. If this is the effect even Blazing Saddles has on me, I won't be trying to watch (and review) other films by Mel Brooks. For the most part, my impression has been that they are best suited to the mindset of thirteen year-old boys, from the mixture of grand phrases with crassness to the interplay of various levels of reality.

Lucky for us, there are movies to suit just about every sense of humor. If Mel Brooks fits yours, please enjoy. (Last viewed: July 2017)

More About Blazing Saddles:
=> Read what people say on Amazon
=> Add your own Review or Comments below

Some of the Cast of "Blazing Saddles"