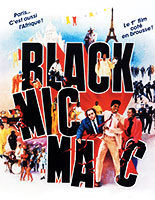 
After a health inspector and his team decide to close down a derelict project that is home to countless families of Africans, a holy man is flown in from the Congo to stop the bulldozers. On the flight over, a young upstart learns of the funds involved and takes the healer's place.

This is a very funny but not silly movie that takes a compassionate look at the African community of Paris in the mid-1980s, a side of the famous capital city that would be unknown to most foreigners—and probably to most Parisians as well. There is a side-plot that involves a restaurant and a romantic interest. Jacques Villeret (from The Dinner Game) carries his role very well but is not the main source of comedy—this time he doesn't play the clown. Luckily there is more talent, starting with the young upstart, who is something of a French-speaking Eddie Murphy and does a lot for the film. (Last viewed: July 2014)

More About Black Mic Mac:
=> Read what people say on Amazon
=> Add your own Review or Comments below

Some of the Cast of "Black Mic Mac"