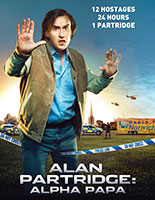 A sacked radio DJ takes the station crew hostage and appoints a trusted colleague (who in fact triggered the dismissal) as negotiator. This is a chance to see the lead character of the UK TV series I'm Alan Partridge in a full-length film. It won't disappoint fans, and it should also entertain those who are unfamiliar with the series. (Last viewed: September 2014)

More About Alpha Papa:
=> Read what people say on Amazon
=> Add your own Review or Comments below

Some of the Cast of "Alpha Papa"