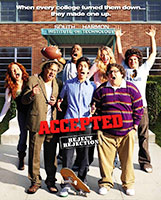 To fend off his anxious parents, a young man who has been rejected by several colleges prints out an acceptance letter from a fake college with a fake website. Things get out of hand when a hundred "students" offer him tuition. This movie is surprisingly not crass. By the same token, despite everyone's good intentions, it is surprisingly unfunny. I can't think of a good reason to watch it. (Last viewed: July 2015)

More About Accepted:
=> Read what people say on Amazon
=> Add your own Review or Comments below

Some of the Cast of "Accepted"