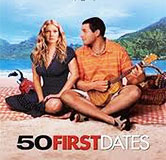 The walrus minder at a Hawaiian aquarium falls in love with a woman who has no short-term memory—every day, he must make her fall in love again. A few laughs, lots of chuckles, very very sweet, and delightfully chilled out thanks to the Hawaiian setting and holiday music. It's perhaps my favorite romantic comedy; which makes sense, seing that the plot has elements of a "Groundhog Day" in reverse. (Groundhog Day is one of my all-time favorite comedies. In it, Bill Murray keeps reliving the same day, and remembers it.) (Last viewed: August 2011)

More About 50 First Dates:
=> Read what people say on Amazon
=> Add your own Review or Comments below